× Bidding has ended on this item.

Hermes 3000 typewriter with brush and manual. 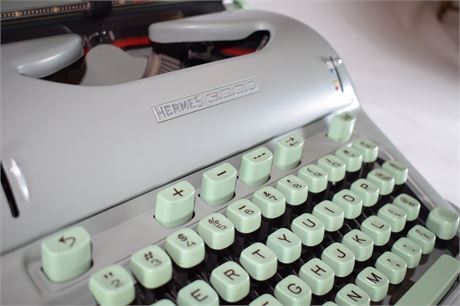 Full 44-key office keyboard with finger fitted key tops, including a wide selection of special symbols. The Hermes 3000 was first introduced in 1958 and was an instant success. It was one of the most sophisticated manual portable ever made. Its major innovations included the world's first lightning margins (visible in front of the sheet of paper), a control board grouping all the service keys, and integrated base plate and cover to facilitate handling and carrying. It is a great all around versatile typewriter. It was designed for office use, with many features common to office machines but seldom found in portables. Its ease of handling and clarity of type make it the ideal personal typewriter for writers and executives. Its is compact, lightweight, and extremely reliable. It is the Hermes 3000 into the ultimate in professional portables. The Hermes 3000 is regarded by many to be the one of finest portable typewriters in the world. It was considered to be one of the most advanced manual typewriters that had ever been made and one of the most sought after manual typewriters. The designer of the Hermes 3000 was Paillard, a company from Yverdon, Switzerland. This company spent years researching how they could improve the current typewriter design. After dissecting many of the current models, they were able to add features to the typewriter that made the Hermes typewriter one of the top models to own. Many writers often preferred the Hermes typewriters to others because of the quality pages they produce. Larry McMurty, a well known screen play writer and author of Broke Back Mountain even thanked his Hermes typewriter when he received an award. “Most heartfelt, I thank my typewriter. My typewriter is a Hermes 3000, surely one of the noblest instruments of European genius.” The typewriter comes in a seafood green hard case. The case is in fair shape. The typewriter itself is in close to mint condition. This is widely regarded as one of the greatest writing machines ever created.